Ever since visiting The Enchanted Forest nursery, I have been obsessed with Fairy Gardens. One day, after dropping Ryan off for his classes, I did a little shopping at Hob Lob and found the centerpiece for our own little Fairy Garden: 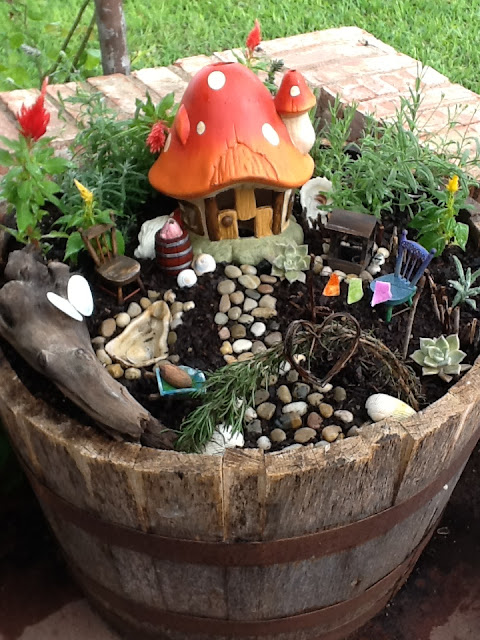 This mushroom house was tucked in with some creepy garden gnomes. I used the 40% off Hob Lob coupon on my phone and got it for less than ten bucks!  Then I ventured into their doll house furniture section and picked up a few chairs, a barrel, a wheelbarrow, and a little wooden well.  They also had a free booklet on making your own Fairy Gardens. 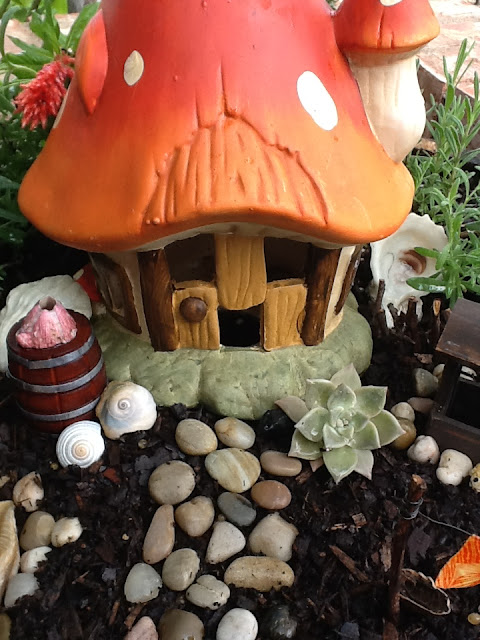 The boys thought I was a little nuts for wanting to make a Fairy Garden, but I think they are so cute and whimsical! Mary Grace will love it when she's old enough to play with it.
So we set about filling up our old wine barrel with dirt and I placed the mushroom house in the middle then just stood back. The boys went wild with imagination and found objects from the yard to complete the garden.

They used an oyster shell (from our recent trip to the beach) as a pool.  They also painted all the little furniture I bought.  Here is the wheelbarrow holding a pecan: 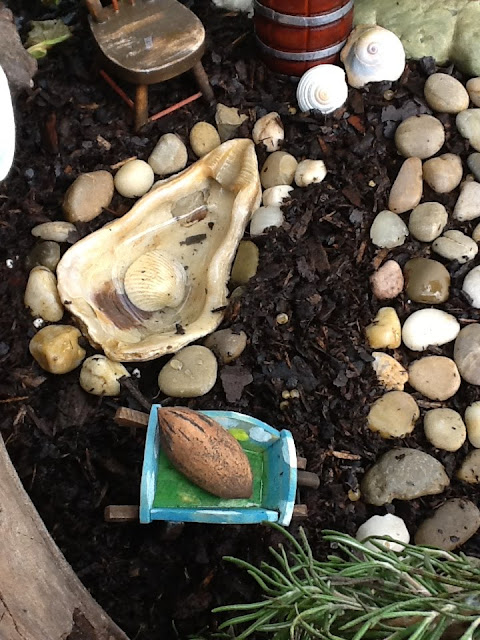 We also made a little clothes line complete with a pecan shell laundry basket!  I have to admit, it's probably my favorite part of the garden! 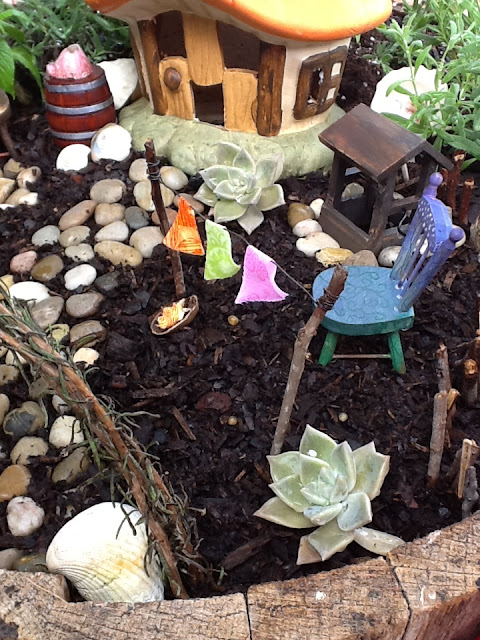 We had the best time putting the garden together and I am so delighted with all their creativity! My only contribution was the actual garden. I planted Provence lavender, celosia, and succulents to fill it all in. 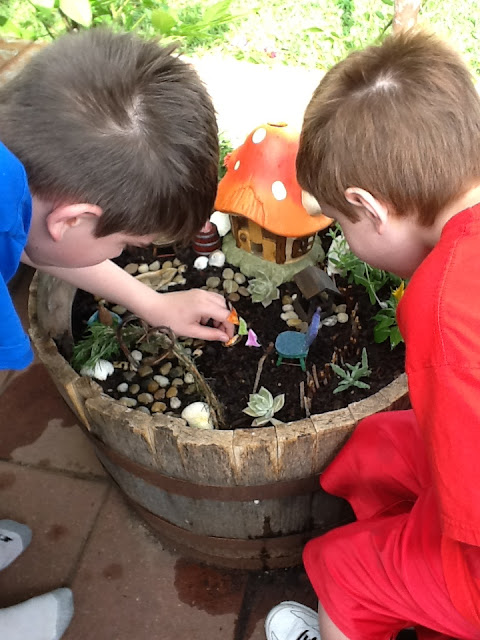 It was all going so well and I was relishing in the boy's thoughtful creativity when later I found this: 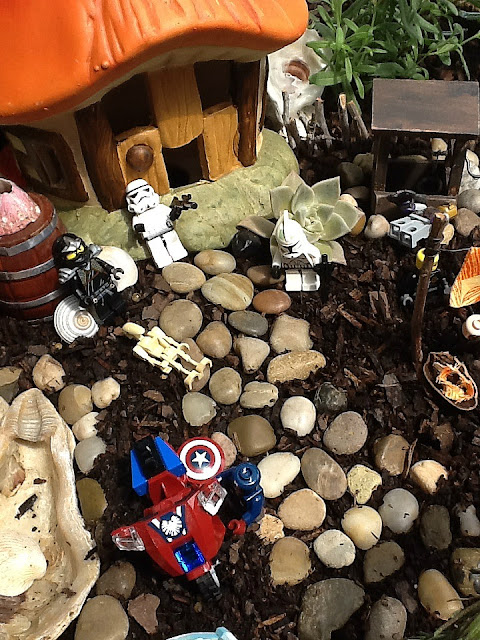 You know, in case any of those creepy gnomes show up!

Love it! I want to make one of these for the girls. I think the storm troopers are a nice touch. ;-)

You have the cleverist and most creative family. I'm not sure who would like one, but I am going to try my had at a Fairy Garden (again). I did one - not as clever as yours when Laura was little but she wasn't too impressed. This one will be for me. Aunt Nancy

You and your boys are so clever and creative. I am going to try a Fairy Garden ( again ). I did one -not as neat as yours - when Laura was little. She wasn't too impressed. This one will be for me and Mary Grace when she comes to visit me. (Hint, hint).
"Aunt Nancy"

I see I still haven't master the technique of sending comments, but the garden was so darn cute it really deserved two comments - and more. I keep thinking the first comment didn't go through so I rewrite. Again it deserves plenty of recognition. Like Aimee I think the "storm troopers" are a neat touch. "aunt Nancy"

It is gorgeous JoAnn. I wish I had a little girl that would enjoy it. I think Amelia would say she is too old for a fairy's garden though.

Definitely make one, even just for yourself. It makes me smile every time I step out on the back porch!

Love it, love it, love it! My kiddos are all old now, but I agree, making one just for fun! I'll tuck it away into a corner under the pine trees for some little visitor to "discover." I agree, Storm troopers definitely to keep away the gnomes! Have to dig out some of Peter's old pirate legos to do the same.

I love this so adorable!

I need to get busy and get a FAIRY GARDEN growing. Your's is adorable. I must say-- if and when I make one it must have a clothes line! that is the best part of yours, I say.
In fact...it is one of my favorite things about my back yard as well.

Love this!! I have started one, just need to get more stuff to put in it!!

This is so beautiful. Great job. Love the 'testosterone' influence! LOL You may like to see the ones I make on my blog:
http://elowezil.blogspot.com
Thanks for sharing your great ideas.

It's 2016 and your post is still making us happy! I loved what the boys added, it is so like boys! Beautiful, it made me laugh so hard! 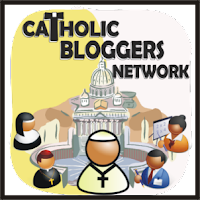 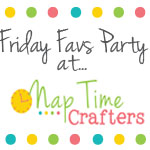 I want to hear from YOU!

Reasons my laundry isn't getting done: 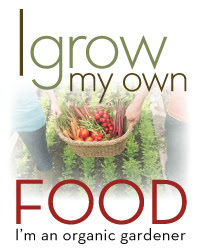